Do you have a question only another nurse can handle? This is the place to post it.
Forum rules
Post Reply Previous topicNext topic
First unread post • 4 posts • Page 1 of 1

Quack nurses continue to give bad perception of nurses’ image in Nigeria. How well do you think we can reduce their increase if not eliminate them to make nursing a more rewarding career as it ought to be.

I do know that N&MCN and NANNM should play a major role. However, our individual action, comment and contribution to fight quackery in nurses are important.

Make your voice count and share your ideas.
Nigerian Nurses lighting up the world one candle at a time.
Top

Join the war against auxiliary training or any hospital using then in Lagos state.
Dear colleague particularly those of us in private practice. Protect your profession and your job.

If your state has a particular agency that regulate hospitals in your area send it now. 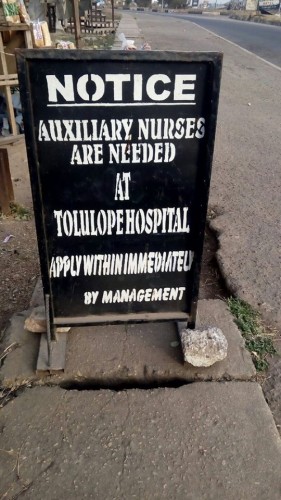 Folahanmi Rawfiat Sijuwola The truth is,majority of private hospitals makes the use of auxiliary nurses more than they employ RNs for their own gain and profit. but i believe the change will only take place when some of us nurses stops joining hands with the Drs in training them ,especially those married to Drs who owns hospitals. This development is a good one but will need our sincere determination and cooperation , because we will need to report most hospitals then ,am hoping there wont be boycotting and taking of bribe on the part of the officials we are reporting to.

Kolawole Ogunnaiya I discussed this issue with a colleague and we ended nowhere. It is not easy to banish this group of workers. I used the word 'worker' advisedly. They are earning a living. The way I see it is that let this group of workers be absorbed by various govts into the hospitals as nursing aides. I can already feel some adrenaline in my professional colleagues on the use of the word nursing to the aides, but this is what obtains in civilised climes. What they will be doing in hospitals? They give baths, make beds, give bedpans, change soiled sheets, feed the helpless among the patients. This will allow the RNs to face their real professional jobs which will now be more cerebral, intuitive and with an immense responsibility. RNs become decision makers and the buck stops at their tables. They carry all responsibility include serious supervision of all those under them. Train them for 6months and they will be ready. Let them wear whatever uniform they want. The hood does not make the monk. All the aforementioned exchange of words is not necessary. Argue with a fool and people may not know the difference. Give them a regular job by the government, and that will sound the death knell of the auxilliaries. But without an alternative job for them, there's no headway. Then we can face how to regulate clinical practices in our various private hospitals. This is the sole responsibility of the government, no rhetorics can conjure a miracle. Let us think about this option seriously

Yes this is an important issue. It is important for nurses to be trained, but as mentioned some nurses aids can be helpful and leave the nurses who have studied space and time to do their job. Can we not encourage these nurses aids to study? They should be able to complete a shorter program and be licensed to do work such as cleaning bedpans and changing beds, etc.

Yes - reporting hospitals and noncomplying nurses is important. It's for the patients' well-being.
Top

Return to “Nurse to Nurse Discussion”