Can someone get pregnant during her period?

Can someone get pregnant during her period?

Yes, it's possible to get pregnant during your period. You'd have to have a very short menstrual cycle, which is the time from the first day of one period to the first day of the next period, or a tendency to have long periods. 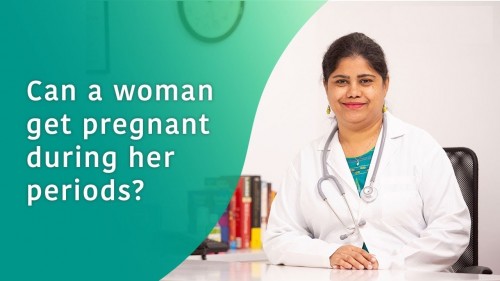 Conception occurs when an egg and sperm meet in a fallopian tube. Sometime during the middle of your menstrual cycle, most likely between the 12th and 16th days (if you have a 28-day cycle), an egg reaches maturity in one of the two ovaries. The ovary releases the egg into the abdomen, where it's quickly sucked up by the tulip-shaped opening of the nearest fallopian tube.

A typical menstrual cycle is about 28 days long, but some women have cycles as short as 22 days. If you have a shorter cycle, you could ovulate just a few days after your period ends. And since sperm can survive in your reproductive tract for up to three to five days, if you meet your partner during your period, it's possible that the sperm may still be hanging around when you ovulate, ready to fertilize the egg.

It's also possible to mistake breakthrough bleeding — spotting between your periods — for a regular period. So you may be bleeding right at the time of ovulation, when you're most fertile. If you were to conceive at this time, you might believe that you were having your period when you got pregnant.

If you had unprotected sex during your period and are concerned that you may be pregnant, look out for symptoms like mild lower abdominal cramping, spotting (implantation spotting, a fairly common cause of bleeding once the egg has been fertilized), breast tenderness and moodiness. These symptoms can occur as early as two weeks after ovulation.
Top

with your explanation, there is 100 percent assurance that someone can be pregnant while doing her menstruation.

It is possible for women to get pregnant even if she is bleeding from her vagina. Sometimes ovulation may occur before your period is over and sometimes it happens soon after. In both cases, if there are sperms in the vagina, it is possible that the egg released during ovulation is fertilized and you get pregnant.

Also, in some cases, women experience slight bleeding during ovulation. Though this bleeding may look like menstruation, it is not. It is commonly known as mid cycle bleeding or spotting. If you have unprotected sex during this time, it is possible that you might get pregnant.

Thanks a lot for information.
Top

The question about whether you can get pregnant on your period or not is probably the most common of the three situations noted above. The answer is yes and no. The probability is that you would not get pregnant having sex during your period.

Apart from being messier and less desirable, having sex during your period will more than likely not result in getting pregnant. More than likely, your ovulation is several days away decreasing any chances of conceiving during this time.

However, there are exceptions. The above applies to women who have typical 28 to 30 day or longer cycles. If you happen to be one of the individuals who has a shorter cycle there is a chance you could get pregnant while having sex during your period.

Now you are asking, “How does that happen?” If your cycle is shorter, for example, every 21 to 24 days, this means you are ovulating earlier in the cycle. Sperm can live inside you for 2, 3 and up to 5 days. You could have sex towards the end of your bleeding and then actually conceive 4 or 5 days later with your early ovulation.

The probabilities of getting pregnant while on your period are low, but the possibilities are there. This is not the time to have sex if you are trying to get pregnant.
Top

Can You Get Pregnant Right After Your Period?

If you stop bleeding on Day 6, have sex on Day 7, and ovulate on Day 11. It is possible that the sperm from Day 6 will be waiting in your fallopian tubes for conception. Of course, your chances of conceiving right after your period increase with each day after your bleeding has stopped. If you are trying to conceive this is a good time to start having sex. Increase your chances of conception by having sex every other day for the next 14 days.

The likelihood of getting pregnant right before your period is extremely low. For women who have a typical cycle of 28 to 30 days or longer and their cycles are regular, it is fairly safe to say that your ovulation occurred between Day 11 and Day 21. The egg is only available for 12 to 24 hours for conception.

If you know when ovulation occurred and you wait for 36 to 48 hours later, then you should be beyond the possibilities of conception. The further you move away from ovulation, the less likely your chance will be for conceiving. This is not the time to be having sex if you are trying to conceive. However, it is still a good time to enjoy intimacy with your partner.

Users browsing this forum: No registered users and 27 guests